I’d been researching the role of impact producers in journalism (we need more of these, by the way) and documentary films when I came across new legislation in Utah to regulate its troubled-teen industry. The story behind the law involves a journalist, two lawmakers in two states, a celebrity influencer, an activist group and an impact producer all working on the same issue.

Their individual yet connected actions challenge us to think about the roles journalism and funding play in action, the importance of taking the whole system into account and, in the end, what motivates everyone to keep going. 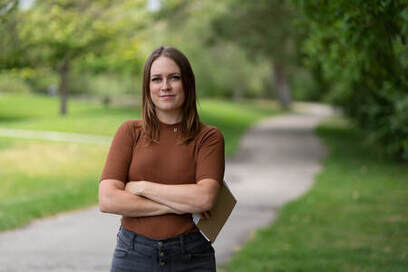 One Sunday night in May 2019, a dozen students began fist fighting at a troubled-teen center in southern Utah. Cops were called. The SWAT team showed up. The night ended in multiple injuries, and more than half of the dozen rioting students were charged.“We were so reactive to this news,” said Jessica Miller, a reporter at The Salt Lake Tribune newspaper. She needed to know more, to know what led to the riot. “What could be learned if we were more proactive?”So she spent the time between then and now — minus what it took and still takes to cover the pandemic — being more proactive about that story. Digging until she uncovered one of the most outrageous stories in her two-plus years investigating Utah’s troubled-teen industry: a girl in zip ties forced to sit in the cold, dirty water of a horse trough.

Back then, in 2019, the troubled-teen industry fell into a gap between beats. Miller started learning more by submitting public records requests. She reported deeply on staff members, and eventually the school with the riot — Red Rock Canyon in St. George — shut down.

She sought out and earned a fellowship in data journalism from the University of Southern California Annenberg School of Journalism that included funding, training and mentorship.

“We started looking at this industry as a whole — how much other states are spending to send kids here,” Miller said.

She filed a large records request. “Inspection reports from the office of licensing,” she said. “$6,000.”

Public records are public, yes, but governments are allowed to charge for the labor and copying costs of satisfying requests. Newsrooms have limited budgets for records or sometimes can’t pay at all.

“We couldn’t pay it,” Miller said. “At first we didn’t do it. We tried to figure out other ways to do it.”

Right around then — in September 2020 — Paris Hilton’s documentary film, This is Paris, premiered on YouTube.

Rebecca Mellinger, a USC grad, is an impact producer working with Hilton. In the documentary, the actress and influencer comes to grips with her own time spent at one of these troubled-teen centers in Provo, Utah.

“I was verbally, mentally and physically abused on a daily basis,” Hilton said. “I was cut off from the outside world and stripped of all of my human rights.”

“All of these survivors are taking to social media in the thousands,” Mellinger said.

Clearly they had momentum — momentum they could use to help stop abuse from happening at these facilities, to help save at-risk children now and in the future, and to support abuse survivors.

The work is nearly full-time (sometimes they’re busier than others) and has been going on for months. The public awareness campaign is what led her to Miller.

Miller wanted to use it not just to get the public records but also to build the first free, searchable database of reports on violations at Utah’s troubled-teen treatment centers.

“After doing this work for more than a year or so, getting so many emails from parents asking ‘I want to send my kid to this place, what do you know?’” Miller said, “it showed us how much of a need there was.”

Mellinger asked how they could support Miller’s work, and though they were working on the same issue, journalism’s code of ethics requires keeping an arm’s length distance from those who are trying to influence the news. “She offered to pay but we felt uncomfortable because she’s an activist,” Miller said.

Instead, The Salt Lake Tribune launched its first crowdfunding campaign (using MoonClerk) and set a goal of raising $10,000 — the cost of the records plus coding, etc. Miller wrote a story explaining why: “It is easier for a person to go online and find the latest inspection for a restaurant than it is to find reports on whether a youth residential treatment center is keeping vulnerable children safe.”

“When I think about the database, I think it showed us that we can fundraise in this somewhat nontraditional way. … that that’s a possibility,” Miller said. “Clearly there was a need in this community and it was wider than just our subs [subscriber] base.”

The fundraiser took place in October, the records arrived in February, and after some data cleaning the database published in March 2021.

That’s when Miller learned about the horse trough.

It started as a routine police call. In June 2018, a 17-year-old girl living at a treatment center for troubled teens had hit a staff member in the face during a therapy session involving horses. But when deputies arrived at the small ranch in southwest Utah, staff said the suspect was waiting “in the trough.”

Confused, the deputies walked back to the corral. There they found a girl sitting in a tub of dirty water up to her torso. When the girl stood, they saw her hands were zip tied behind her back.

One deputy yelled for a staffer to get her out of the water, according to the police report. Another cut her loose.
The girl told deputies she had tried to run away from Havenwood Academy, a 16-bed treatment center located a few miles from the horse property. When a staffer had tried to stop her, she had thrown a punch, she told them.

By the time the deputies arrived, she had been in zip ties for about 30 minutes, she told them, and in the horse trough for about 20.

In the story, Miller quite quickly turns from this incident at Havenwood to the systemic problem of Utah’s approach to regulating the youth treatment industry — investigations, but no individual or institutional penalties.

“It’s kind of been our goal all along, past the riot, (of) trying to tell stories of individual instances and put it in the greater backdrop of industry, particularly in Utah,” she said.

“The woman who pioneered putting girls in troughs remained Havenwood’s equine director until she quit of her own volition,” Gustus wrote. “She left around the time Jessica and a small team of journalists published a database that included infractions at Havenwood and elsewhere. This database was created with your support — donors and subscribers helped pay the thousands of dollars in open records fees we had to pay to secure the infraction reports.”

In the meantime, Hilton organized more than 100 fellow survivors in a march past Provo Canyon School. Utah Sen. Mike McKell reached out to discuss legislation, Mellinger said. Sen. Sara Gelser of Oregon, a state that sent some of its foster kids to these centers, including Red Rock and Provo, became perhaps the most outspoken lawmaker. (These aren’t Utah kids, Miller told me. Ninety percent of them are from out of state.)

Finally, in March 2021, Utah passed McKell’s bill requiring troubled-teen facilities to be investigated four times a year and to report when they administer medication to a patient. Gov. Spencer Cox signed it, saying “first and foremost, it’s about protecting the lives, especially, of our young people in these programs.” The law went into effect in May, two years after students rioted, less than a year after Hilton rallied in Provo and a little more than three months after it was introduced. It was the state’s first legislation in 15 years to address mistreatment at youth facilities.

“It happened so quickly, but people were ready to talk about it where they weren’t two years ago,” Miller said.

In an April email to readers, Gustus quoted Sen. McKell from the first committee hearing:

“There’s a natural tension between the press and the Legislature from time to time. I think Jessica Miller has been fantastic. I don’t know where she is in the room, but I think she’s done a fantastic job with her investigative reporting at The Tribune, finding some of the failures in the state of Utah. And I think that’s to be appreciated.”

Breaking this story down to its parts, we can begin to see how a major industry treating mostly out-of-state kids landed on Utah’s public policy agenda:

“I do hope through this case study of Paris … (that) anyone with a platform looks at this and does want to pursue something they care about as well,” Mellinger said.

Mellinger and Hilton are working with Breaking Code Silence to get a national bill passed and keep people engaged in the issue through Change.org and email updates. “We’ve really made it a priority to create a coalition of organizations,” Mellinger said.

They still want Provo Canyon School shut down, an early goal of their campaign, but their focus has shifted more toward policy. “We’ve got a long road ahead, but obviously the momentum is there,” Mellinger said.

“An impact producer morphs based on the project,” Mellinger said. “That’s the joy of it. It’s about the solution.”

Miller, for her part, continues to report the stories of abuse and keeps a “very close eye” on whether the new law is being followed. She’s collaborating with KUER public radio and APM Reports on a podcast about her investigation called Sent Away. It will be released in late fall.

“The hard part about this industry as a whole is you can call anything therapy,” she said. “No one’s questioning ‘hmm, is that therapy?’”

That is, no one was.

More: Inside Utah’s troubled teen industry: How it started, why kids are sent here and what happens to them

To support Miller’s work and The Salt Lake Tribune, go to sltrib.com/donate.

Anjanette Delgado is the senior news director for digital at the Detroit Free Press and freep.com, part of the USA Today Network. Email: adelgado@gannett.com, Twitter: @anjdelgado.